The Mets did manage to lose a starter to injury, though.

The Mets did manage to lose a starter to injury, though.

No joy on this end about that development.

On behalf of my dad's Marlins, ouch.

Sorry, I assumed everything was normal for the Marlins, since I’ve never seen less than six feet between their fans.

I could go for J Lo owning the Mets. And the other guy too.

I'm trying Dave, but you seem to be the only one biting...

These are interesting ideas being thrown around to restart baseball.  I'm not really taking sides as far as the financial details.  I do like the experimental aspect, considering that the season is basically lost.  82 games, 14 playoff teams, DH, maybe 7 inning double headers.  How about you guys?

given that single season records can't count, I have no problem with some of the ideas I'm hearing like NL DH and 7 inning doubleheaders.  As a Mets fan, some of these ideas seem like they'll give the team an advantage.  Expanded rosters and a DH will allow the team to find a lot more ABs for guys like Davis, Smith, and Cespedes, and that other IF guy what's-his-name.

As a fan my main concern this season, whatever they do, is to not let anyone get hurt by stupidity, like too short a "spring", or overwork during a game.   The playoff format might be fun.

As a fan my main concern this season, whatever they do, is to not let anyone get hurt by stupidity, like too short a "spring", or overwork during a game.   The playoff format might be fun.

I'm most concerned about a team having a coronavirus outbreak

I’ll take MLB baseball almost any way I can get it this year. Long term, though, I doubt I’d ever embrace the DH (not to mention the extra-inning table-setting that was a minor-league experiment).

I agree.  I like a DH this year, but not after.

I don't know where else to put this, but since it's still the offseason, why not here.  I was reading a story in The Athletic today --  The All-‘Wait-they-were-on-that-team?’ players for every MLB franchise.  They put together an entire starting team and pitching staff for each team, based on how much better players were for the other teams they played for in their careers.  The article mentions one Harlond Clift, who played for the St. Lous Browns and the Washington Senators in the 1930s and '40s.  Those were both terrible team, which I guess accounts for Clift's relative anonymity today (not to mention neither team exists today, so there really aren't many people keeping their legacies alive).  But I have to admit in all my years as an avid baseball fan, I had NEVER even heard of Harlond Clift.  And he was one of the best players in MLB in 1937 and 1938, finishing in the top 20 in MVP balloting both years.  There were his hitting stats for those years:

Apparently I was not alone in having no knowledge of Clift, because even when he was alive, he had been certain that almost no one remembered him.  According to the SABR organization:

Clift was remembered twice for his career as a ballplayer. He reportedly broke down and cried when he received an invitation to an old-timer’s game at New York’s Shea Stadium, so surprised was he to be remembered at all.3 Then in 1977, Clift was inducted into the Washington Sports Hall of Fame.

I'm curious if anyone else had ever heard of Clift.  He was quite the ballplayer in his time.  According to Baseball Reference, he was the Ryan Zimmerman of his day

Saw this today in an article about the 1919 Stanley Cup finals that were suspended due to the flu pandemic, which resulted in the death of star player Joe Hall:

Major League Baseball was the dominant sport of the time. Worried about viral transmission, it banned the spitball.

I had no idea.

The Cost of Rushing Back to Sports: A Star’s Life

Here is some good news, and I don't mean the return of baseball games.  Former major league pitcher and current major league ******* Curt Schilling deleted his Twitter account this week.

Curt Schilling compares Bubba Wallace to Jussie Smollett: 'It was all a lie'

Note to Mr. Schmidt: my niece is engaged to a Blue Jays pitching prospect. On Saturday he threw two innings vs. your Phils (well, 1 1/3). Got to face Hoskins, Harrison, Kingery, Walker and Forsythe, among others. Was very exciting for me to listen to the radio broadcast. Just thought I'd share.

That's awesome. It was fun going back to the box score and retracing his appearance. Must've been strange to have almost the entire defense, including his catcher, subbed out between his innings. Next time, Charlie, let him work out of the jam and retire Deivy Grullon!

I remember when Ken Giles, the pitcher he followed, was in his shoes. Best of luck to your future nephew, and thanks for sharing that.

You’ve made it impossible for me to resist sharing, too: In the fall, the Giants asked the sports analytics club at my son's college to work up some minor-league data. Also on Saturday, the Giants flew him and his project team down to Scottsdale to make their presentation to minor-league coaches and then to major-league staffers. The students spent some time at the minor-league facility (where my son was surprised by how much the drills reminded him of Columbia High practices), then caught most of the Angels-Giants game (a Trout sighting!) before getting a tour of the stadium (a Darin Ruf locker sighting!).

A bee-yoo-tee-ful day for baseball on both the Grapefruit and the Cactus circuits. 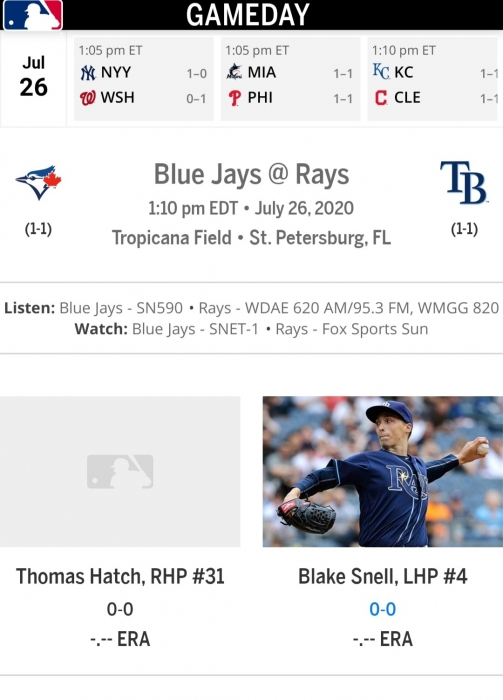 In order to add a comment – you must Join this community – Click here to do so.
Start a new discussion