Tropical Storm Henri has taken a bit of a turn and is now forecast to make landfall (possibly as a cat 1 hurricane) on the east end of Long Island or southern New England Sunday morning.

Impacts here could be some rain and a storm surge at the shore.

We have a weekend booked in Waterford, CT from Saturday through Monday. Debating whether to go or not. This one is so unpredictable, even to the last minute.

Latest models continue ticking westward. The NWS has posted Hurricane Warnings for Suffolk County on Long Island, and watches for the city and Nassau.

MAPSO is not currently under a watch or warning. The watch does extend to eastern Essex County, including parts of Newark, and towns east of the parkway. If the forecast holds, we would only see 0.5 - 1.5 inches of rain. Wind would not be an issue. At this time, I think these are solid forecasts.

However...This storm has been ticking west for repeated model runs now and some sub-elements of various models are mildly alarming. We need to keep an eye on this storm for the next 24 hours or so to get a better feel. If you remember last year, and years before, we often cannot be sure on a hurricane track until the day before. Because these storms tend to run parallel to the coast, a small shift can make a big difference in point of landfall.

That said, it is still very unlikely that Henri will make landfall on New Jersey.

Maplewood is right on the edge of the tropical storm watch. Though unlikely, there is still a possibility this thing continues to trend west. Probably best to start preparing for some power outages just in case.

The models are coming into agreement with Henri making landfall on Eastern Long Island early Sunday morning as a tropical storm, although cat 1 hurricane is not outside the range of possibilities. MAPSO is on the far edge of the affected area, but the storm is likely to have a very sharp gradient, that is, the amount of heavy rain will rise steeply over a short distance. The result is a rather wide range of forecast precipitation that will not get any narrower until we actually get rained on.

Currently, rainfall predictions are in the 0.5" to 4.0" range. Some showers from Henri could reach us by nightfall but more likely we will not see any real rain until well after midnight, continuing through the morning Sunday.

We are currently only under a Flash Flood Watch.

The NWS has also issued a hurricane local statement which I will put below.

You may have received a tropical storm warning ⚠️ on your phone. Although the alerts come out at the county level, the warning *does not* include MAPSO. It extends over Eastern Essex County, only coming as far west as the Parkway.

Regarding the trends, overnight most of the major models shifted back to the east, away from MAPSO. There is a growing consensus in the models on an Suffolk County landfall and then a track across the Island to Connecticut. Henri is currently located off the coast of South Carolina.

While some aspects of the storm have come into clear focus, there are a couple of points still tbd, most likely by direct observation tomorrow.

What we are pretty sure of:

Henri is likely to make landfall in eastern Suffolk County, Long Island, tomorrow around the middle of the day, as a strong tropical storm or a weak hurricane.

The main effects in MAPSO will be rain, possibly all day Sunday and even possibly overnight and into Monday morning. Wind is almost certainly a minor issue for MAPSO with this storm, which is good since I have heard that PSEG has sent some crews to Long Island in anticipation of more problems there. I think we can expect maximum sustained winds of 15 - 20mph with afternoon gusts up to 30mph.

What is still up in the air a bit:

In the most likely scenario, 1 - 2 inches or less. However, a couple of the models are showing an interaction with an inverted trough that could mean more rain for us. In English, that means there is another low pressure system that could pump more tropical moisture into our area that Henri could then drop on us. In the worst case scenario, up to 4 or more inches. I think this is unlikely, but it is not impossible so I want to note it.

Timing is also still a bit up in the air, not so much for landfall but for when, and for how long, it will rain here. Rain could arrive as early as midnight, but more likely in the morning, around 6:00 or 7:00. Any rain overnight is likely to be fairly light and sporadic. Here is where the models diverge, with some (the GFS for example) showing a compact storm that leaves us fairly dry, and others (the Euro is one) showing steady rain falling all day with some heavier bands in the afternoon.

When does the rain end? Not really sure...

Another feature the models disagree on is where the storm goes after landfall. The GFS has the storm exiting the area briskly and heading off to New England. The Euro has it stalling for much of Sunday night in the Hudson Valley. The latter would mean a longer rainfall for us, with some heavier rain also possible into Monday morning. We are unlikely to know which of these two scenarios will happen until later on Sunday.

The GFS yields less than an inch, the Euro 2 - 3 inches. I'm not going to bore you by getting into the other models out there since I think the spread on these two covers the most likely range. 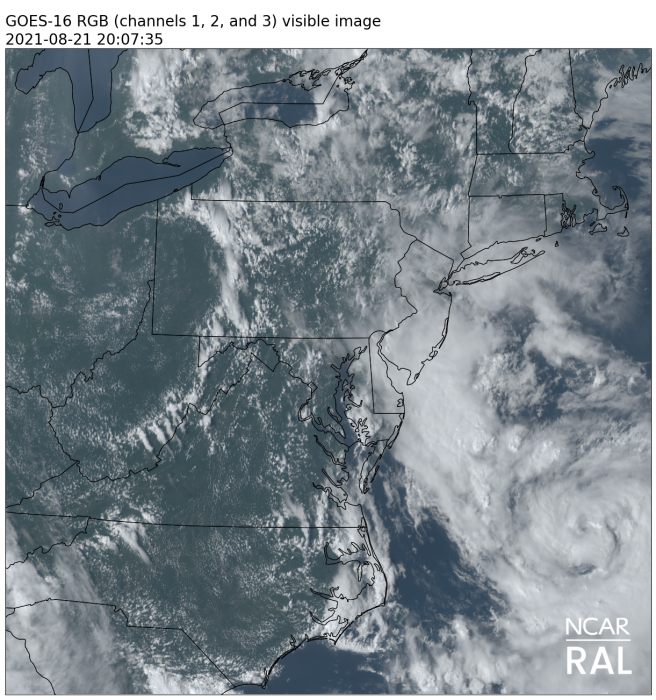 Is this what we’re getting now part of Henri’s system?

So remember last night I mentioned that Henri might interact with a trough an we would get more rain? Well, that happened.

I haven't ventured out to the rain guage yet, but local reports are of 1.5 to 2 inches having fallen in the storms last night, with reports of 4 - 6 inches elsewhere in New Jersey and 6+ in Brooklyn for all you missing the city.

Rain from Henri itself (yes, that was a Previous Rain Event, Henri is not quite here yet) will begin arriving within the next hour or two. Rain will be heavy at times. Extent, location, intensity, and duration of rain will vary, and will be a matter of observation at this point not forecasting. Expect rain continue through at least midnight. We will have a better handle on Monday by this evening as we see whether the storm makes that left turn into the Hudson Valley or heads out through New England right away.

Winds in the MAPSO area maintain the forecast of steady 15 - 20mph throughout the day with 30mph gusts, more likely in the afternoon.

Henri likely to cross Long Island Sound late this morning or midday just east of Montauk as a strong Tropical Storm and make landfall in Connecticut or Rhode Island.

Cranbury and some shore points flooded last night. Road ponding and low-level field flooding (think Memorial Park and the golf course) are ongoing. We would need to get hit with one of the really heavy bands for there to be severe flooding but I am sure there are a lot of very wet basements right now

Rain tonight and tomorrow, probably most of the day. Most likely will see another 1 - 2 inches total by tomorrow night. Although heavy banding and thunderstorms are not likely here, they are not impossible and so we remain under a Flash Flood Watch, just in case.

Here in Eastern Maplewood we have a total of 4.85" of rain so far, with over half of that falling during the PRE last night.

Wind was and will continue to not be a factor in this storm.

Henri has moved north and taken a small jog to the west that keeps us on the outer edge of the rain shield as the storm continues to weaken and slow. How long the storm will hang around (the center is located near the NY/Mass/Conn border) before scooting east through Mass and out to sea is an open question, and will determine how much of tomorrow is rained out.

The video below shows Henri making landfall today ad a relatively well-organized tropical storm, and then breaking apart and devolving into a tropical depression tonight. At the end you can see the center moving into the Hudson Valley region.

I just checked our rain gauge at 10:15 pm. We picked up another half inch to make an even 5". Well the rain barrel is full and all the extra buckets I put out are full (with mosquito dunks deployed of course).

So, is Cranford calling out for the reservation dam again? I gotta say, I feel sorry for them. Has anything been altered in the past 10 years to mitigate the problems downstream from us?

Henri spend the night centered and stalled over the Catskills. Additional rain fell bringing our 24 hour total to 3.11 inches and our total storm total to 5.92 inches in Eastern Maplewood.

Henri is showing signs of starting to move east now, with most models showing a slow exit through Southern New England during the day today. Most likely we will see only 0.5 - 1.5 inches more today, mostly this morning, then tapering off as the system leave the area. There is a slight possibility that a band of heavier precipitation could swing through the area if the storm moves south as it exits.

The Rahway River (yes, the stream is actually a river) is near flood stage in Springfield. Significant additional rain this morning, should it occur, could lead to flooding of low-lying areas. In MAPSO this would mean the new Waterlands fields in South Orange and the golf course & Memorial Park in Maplewood. These areas were designed to absorb and contain high water away from the built up areas.

On the other hand I am seeing a bit of blue sky as I write this...

In order to add a comment – you must Join this community – Click here to do so.
Start a new discussion